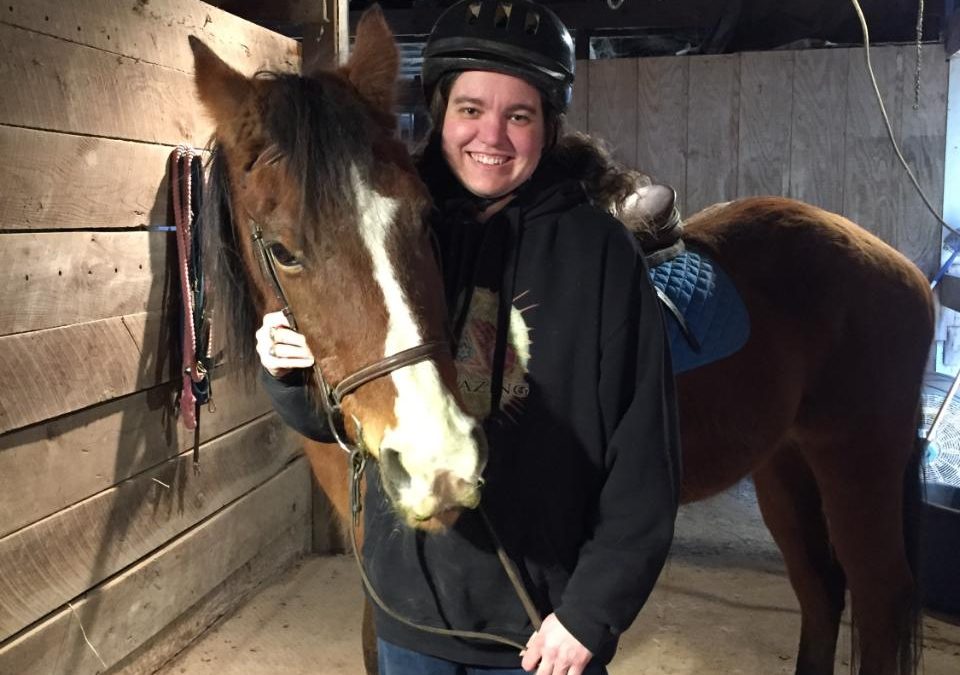 Bayfly-Mr. Bayfly, sometimes lovingly referred to as the outlaw horse. Bayfly is a Quarter Horse cross in his early twenties who had grown up doing a lot of jumping. When I first arrived there it was all he could do to walk he was so crippled in his back and pelvis, so he had been removed from the lesson horse string. He walked and cantered the same speed, but his trot was even slower. So I asked Bayfly what can I do to assist you on your healing journey sir? His reply to me was that he dreamed of jumping again. A part of me wanted to laugh, but I always respect others dreams. So I began Reiki energy healing and told him that we were working toward his dream of jumping. He would snort. Finally got him to where he could trot again without any sign of pain, so he was put back into the lesson horse string. Which appeared to help him mentally, as he was back to work. Eventually he was back to cantering, and I then told Tricia that she needed to jump him. Her reply “you jump him.” I had vowed I would never jump a horse, feared every part of that process. Well soon Bayfly and I were doing trotting poles together. Then our next step was what we joking called ant jumps or a pile of poles. It was at this point that I began to feel Bayfly coming back to life, his energy was reving up for what he thought was coming! Wasn’t long and Bayfly took me over my first jump like a professional horse. Eventually the two of us were jumping two and a half foot jumps. Well as with many older horses he required special hoof care, and our farrier really had a special place in her heart for him. She too could see him coming alive again. So one day after many Reiki healing sessions and practice jumps, I said ya got a minute? I think you need to see Bayfly in action! I took Bayfly to the indoor arena and warmed him up at the walk, trot, and canter and then asked him if he was ready to show his friend what he could do. He answered, and as we had done at least fifty times before he jumped that jump! Something incredible happened in that moment besides a lot of tears and cheering, that horse knew his career was back on track. He had an audience that witnessed his healing miracle! Life lesson learned: With God everything is possible, even if you are an outlaw! Encourage those around you to strive for their goals!