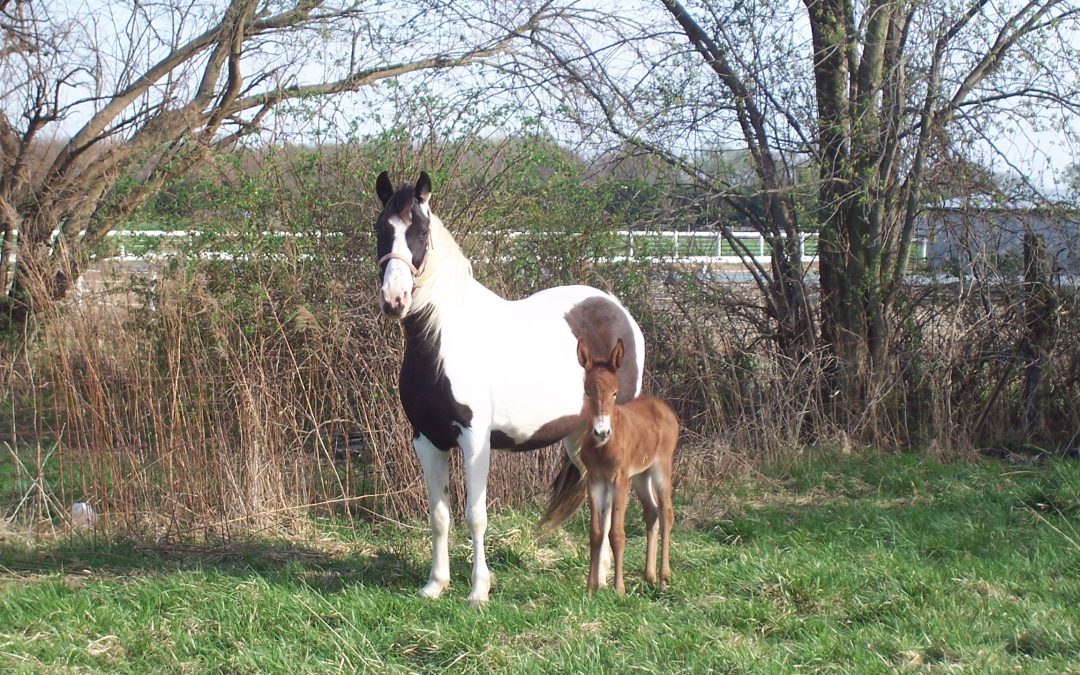 Harley, a black and white painted Tennessee Walking Horse mare, came as a gift back in late 2008. It was quickly determined that Miranda wasn’t skilled enough to ride her, but being that she was a mare, she could breed her and get another mule! She found a jack named Eeyore that was white with two black spots! She loaded Harley up and took her to get bred. Well she got a bad gut feeling one morning when she awoke that something was wrong with Harley. So she went and picked the mare up. She seemed fine, just covered in mud up to her knees and a bit thin. So she put her in the trailer and back home they went. She hosed her down when she got home to find that she had a cut on her right front foot and it was deep! So we had the veterinarian to come out and take a look at her. He said she was cut all the way into her coffin bone…and for those of you horse people out there you know that is not good. Coffin bone injuries equal dig a grave. We had the vet to flush it out, we then wrapped it to keep it clean. By now the injury was causing the mare pain, and she didn’t want to bear weight on her right front. We were getting concerned that it may cause her to founder in the left front. The vet suggested we keep her stalled and continue to flush it out and wrap it up to keep debris out of her foot. He left 14 days of antibiotics, but told us the outlook was poor because we couldn’t continue with antibiotics for long or it could cause the mare to abort. Well that’s never what any horse owner wants to hear, but we felt God had other ideas. Why would He give her a mare only to take her away months later? Granted she was tough on herself, in a matter of a few months she had gotten herself upside down in a cement water tank and managed to cut herself all up. She was in shock when she found her after that incident. She had proven that she was a survivor. So she called some friends of hers and all prayed over Harley. By the end of the prayer she felt that she and God could really help Harley with the Reiki and Essential Oils. Harley was not about to let us touch her for long so she did the Reiki work distantly. In fact she would stand quietly in her stall until I would come to treat her then she would start stomping her right foot. Proof she felt the energy that was directed her way! Some nights as she would work on Harley you could see the yellow/green pus coming up and out of the wound…yes defying gravity. Soon Harley was able to put weight on both front feet again and easily maneuver around in her stall. Wasn’t long she was trotting and cantering around again. As the wound healed mysteriously the scar tissue formed in the shape of an “M.” Amazing! God is an awesome healer! Harley foaled April 6, 2010! Miranda had said many prayers that she would have a healthy filly, with a good head, ear, and eye. She did tell God that He could paint her any color he liked! So she woke up one morning to see a beautiful chestnut filly, “Spirit,” trotting right beside her mother! “Spirit” was unable to be touched as a foal because Harley didn’t trust anyone with her filly. In the near future you will read about Spirit’s Transformational Story here…how far she has come on her journey and how she has helped us here at WOW Natural Healing to grow personally as well!