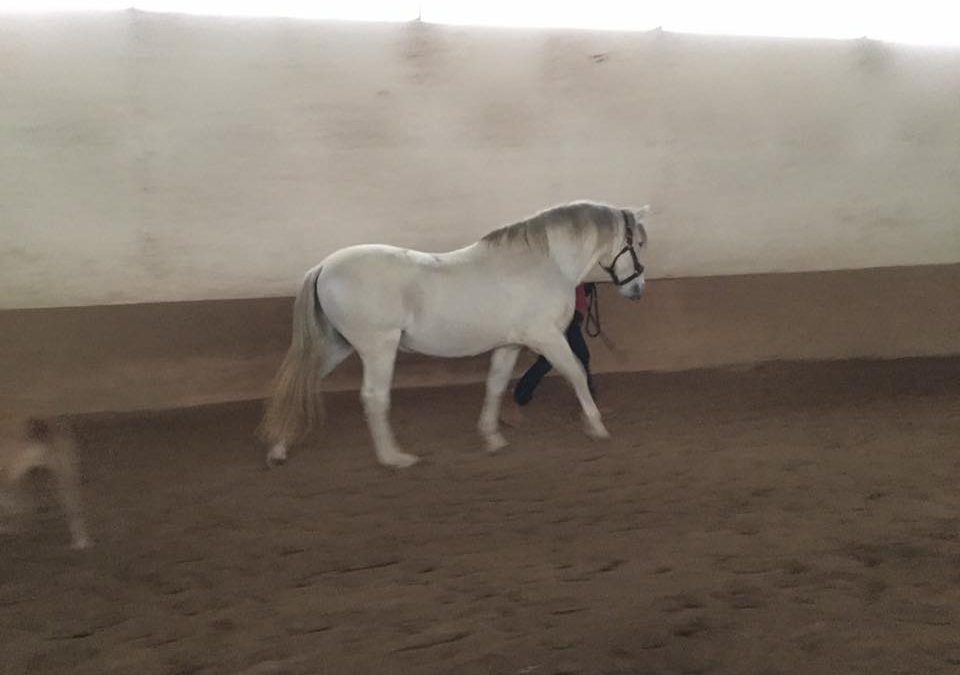 December 08, 2016. Asire’s healing journey…went to Kentucky picked him up and brought him to Indiana…his new home! He has EPM and his rear end has been affected. Asire is a 21 year old Andalusian Stallion who is a foundation sire for the Spanish Norman breed. 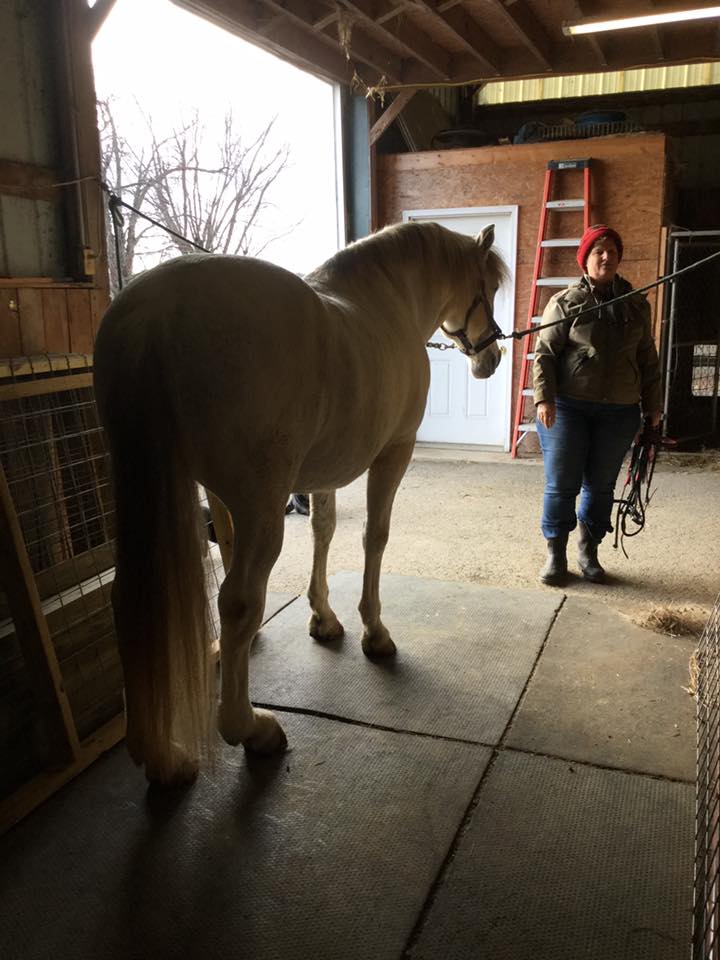 December 9, 2016. Video taken before any energy healing done. Note glitches in the hitch in his hind end and how close his pasterns are to the ground.

December 9, 2016. These videos were taken after his 10 minute Reiki/energy healing session earlier today. Please note the difference in his gait. His pelvic angle is slightly different, he is reaching further forward with his hind legs, and his downward transitions (canter to trot; trot to walk) are more smooth. He is also showing more correct movement in the rear legs especially in the hock.

December 09, 2016. This past life reading was given by Chief.
Setting: Medieval times.
Persons involved: Miranda in that time a male and well decorated knight known for his courage and bravery.
Animals involved: Danza Del Rico in that time a large black stallion named Asire (French meaning “to ensure”) Said slowly “a seer” or broken English “a sire.”
So in this past life Asire was Miranda’s infamous huge black stallion, he never went into a battle or tournament without his armor, nor did she. They were both very well decorated with honors won for bravery and courage. Of course it didn’t start out that way…in the beginning she had to train Asire, they spent many hours and years training and in the beginning it was rough. They both got wounded, had to take time to heal themselves at different times. Mangled Armor, egos destroyed, and confidence gone. But then one day they got it all together, they won big, they became fearless…the crowd cheered! As they walked away something changed, and from that point forward, well they still lost a few, but they were fearless on the battlefield. Asire lived a very long life for those times. She had left him in his paddock and went out, when she returned Asire was found lying on his side dead with a large blade stuck down through his hind end. She knew it was a long painful death and the knight responsible for this had left his calling card! She went and got Asire’s Armor immediately and removed all his honors as no other horse would ever replace Asire…at very least they would have to earn it.
Healing forward from this vision. Tricia was contacted around September by Rico’s former owner. She wanted him to have a good home, that was most important to her. So we went and looked at him for the first time September 30, 2016. At that time we were very concerned about the lameness in the rear end. We were also questioning why we needed yet another stallion. When he first walked away from us he was so lame he almost fell down, a unanimous no way popped out of both of our mouths. So Miranda went over to the owner and said…ok to do some Reiki energy healing on your boy. Just need about 20 minutes. She was very excited and had heard of Reiki before. Instant healing occurred. So we knew based on the healing we witnessed he was a healer. Against all logic we knew this horse belonged at WOW Equestrian. Danza Del Rico means dance of/with the rich. His names put together to ensure dance of/with the rich. During this time Miranda experienced a rough spot in the road, went through a time of depression, then into a major purge! Experienced a period where her spiritual Armor was missing sections. She felt vulnerable and unprotected. Now it all makes sense…all of the pieces of the puzzle came together. She was subconsciously depressed because she had met an honored horse from another time, it was as though she had left her best friend behind. Potentially if she could have seen the vision when they met the horse in September she would have not had the issues with the spiritual Armor while they were separated. Generally speaking when they obtain new horses she doesn’t handle them or even go in their stalls until Tricia says it’s safe. She allows Tricia to set boundaries with them and tell her in her horse training professional opinion how best to handle them. She was hesitant when we first got him off the trailer on December 8, but by December 10th she was cleaning his stall and leading him around. He assists her in feeling that courage and bravery now! He is a pegasus (winged one), unicorn medicine horse, which means he can project healing energy out his third eye and assist in the healing process. His healing presence is felt immediately! You can call him Rico all day, but you call him Asire…he immediately stops and stands at attention.
Miranda saw this healing vision December 10, 2016. We have since pulled the knight blade out, the cellular memory of it, and he is a changed horse. His movement and being has been positively influenced! He is very soft right now, but with the assistance of God, Chief/Spiritual Team, and prayers we no doubt know that he will make a full recovery! Once again she will be able to sit atop Asire!
December 10, 2016. This video was taken after Rico’s Reiki healing session.

December 22, 2016. Today Miranda was able to put him on the lunge line. She did some distance healing work as he was going around! He is healing up nicely…ahead of schedule in fact! He bucked for the first time since he has arrived here today…he enjoyed it so much he did it several times!

January 5, 2017 Miranda has been doing a small amount of distance Reiki healing with him about 5 days per week. His pelvic angle has improved tremendously which has left him able to move better. Improved angle in the hind legs so he is no longer down on his pastern. Amazing improvement in a very short period of time. He was lunged today so he could have some play time and get some exercise. He only took a few lame steps and was very willing to continue moving forward. Saddle to come soon…no rider. Amazing horse who loves to put his heart and soul into his work!

January 14, 2017 Past Life reading by Chief. Rico is one of the 11 original Atlantean Pegasus’s. He has access to the physical healing book which lists many ailments and the corresponding energy needed to assist in the healing process. He works with three ascended beings one of which is Melchizedek.

January 19, 2017 Asire (Rico) all saddled up to celebrate his former mother’s birthday! Been a long time since Rico wore a saddle!

February 9, 2017 Had a Reiki 2 class at the farm today. Just so happened my student was a horse person. He of course wanted to meet Asire. So we go out and put Asire on the lounge line and he of course trots off, but what happened next shocked me. Little did we know we would get to witness a show! Rico took off trotting, suddenly jumped about 2-3 feet in the air pivoted mid air, landed and of course I gasped as his rear end was so fragile and of course we don’t want him to hurt himself. He landed and trotted off not missing a beat. One big happy dance complete with a Thank You God! 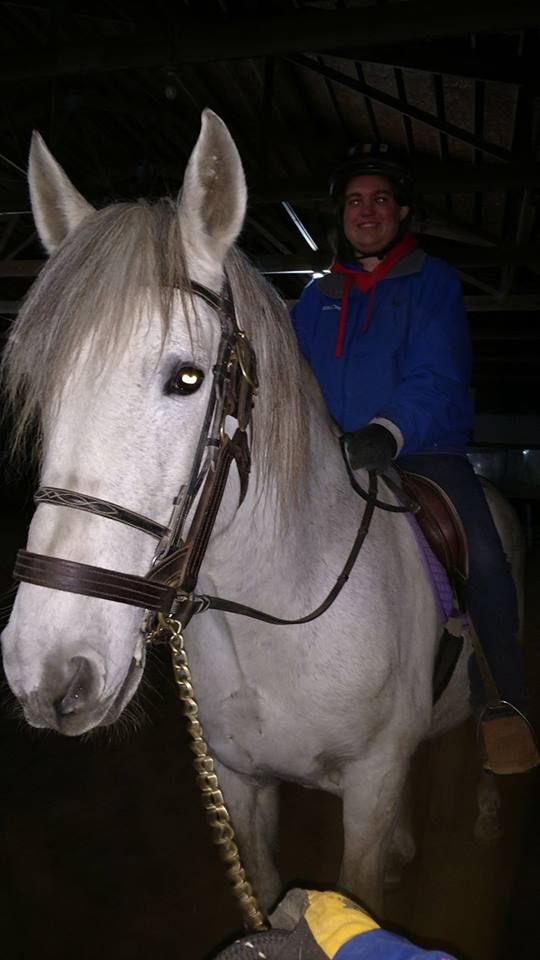 February 10, 2017. Not the best quality image, but you get the idea! For the first time in 17 years Asire is being ridden. Asire is an incredible soul, and we don’t want to push his healing progress, so he is only allowed to walk with a rider on his back. The main reason for a rider is so his energy can be reversed which allows negative energy or blocks to be dealt with more seriously. Lots of Reiki energy healing going on! He is showing more and more improvement daily! He did a total of three circles with a rider. He now thinks this should be a daily activity. Just what improvements are we witnessing? He appears to be less swollen in his hocks and has more flexibility and stability in his hind end. 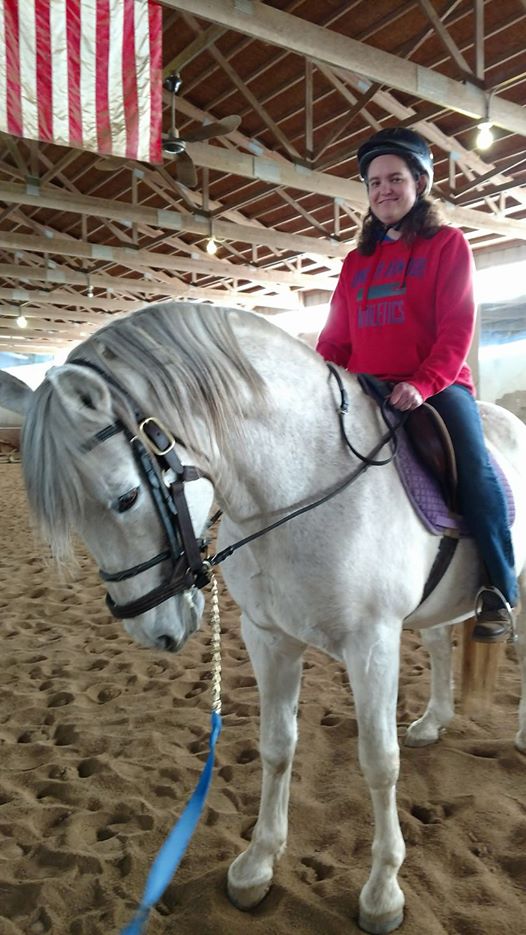 February 17, 2017. Asire is ridden for the 2nd time here at WOW Natural Healing. We never exceed more than 15 minutes of riding per week at a walk. He has a handler on the ground so that he doesn’t take off into a trot or canter. This 15 minutes gives us a deeper insight as to the blockages that remain and where the healing energy needs to go, and just exactly what needs to be healed. Our main concern at this point is his level of physical condition. He lacks the muscling he needs to continue healing on an energetic level. We have asked what stretches will assist in his healing. These stretches have been incorporated into his healing journey, we try to allow him more turn out time (weather permitting), and have integrated more hand walking sometimes over ground poles to help him gain a new level of physical conditioning.

March 8, 2017. We had Asire checked by a Veterinarian for the first time since we picked him up in December and he was cleared for light work (walk/trot) under saddle! I do not intend to go backwards in the healing work that I am doing, so we will still hand lead him when the rider is on his back to ensure he stays at the walk.

March 9, 2017. Asire was ridden for about five to ten minutes today and treated with the Reiki. Unbelievable how strong he is getting in the rear end! 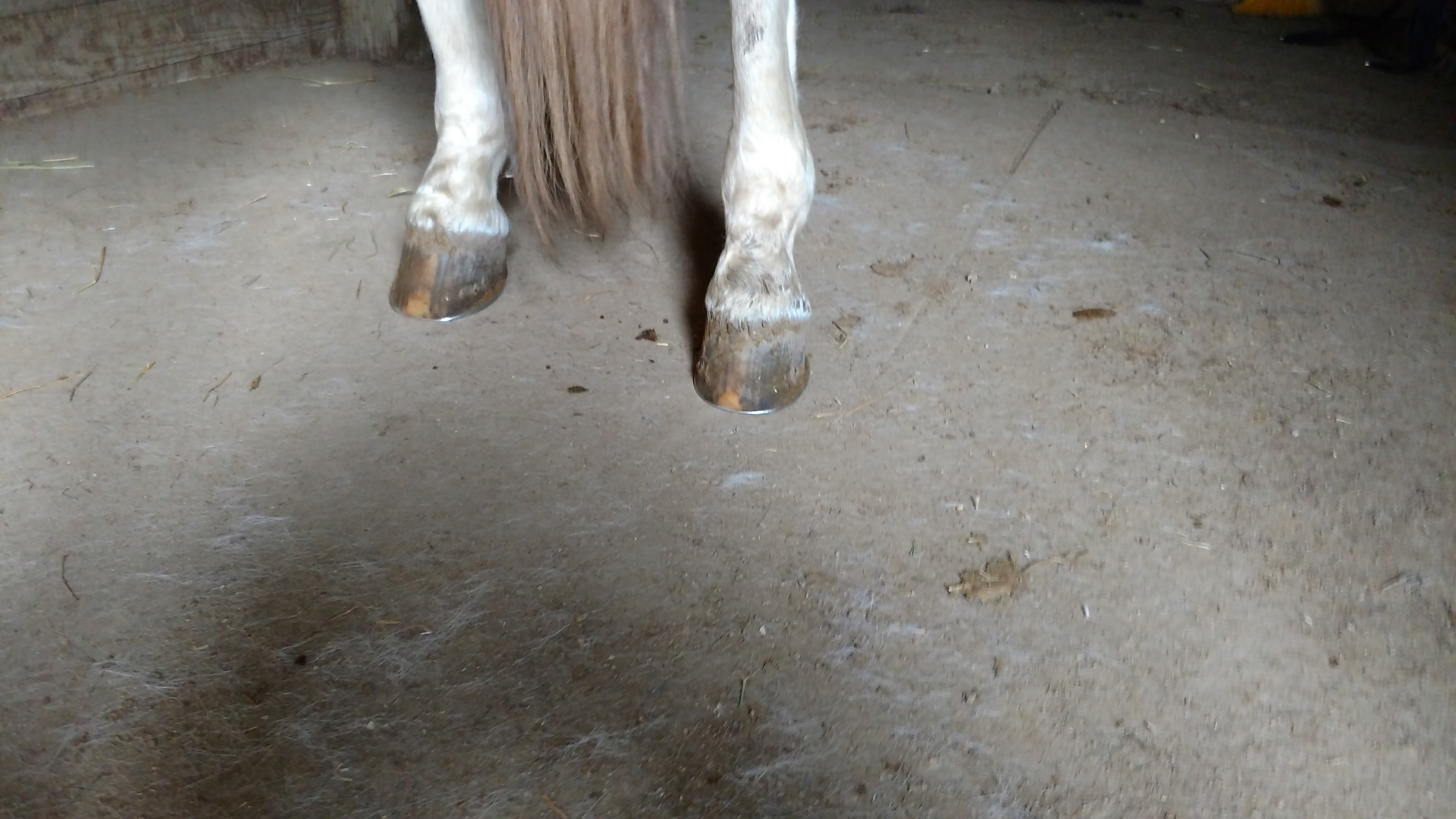 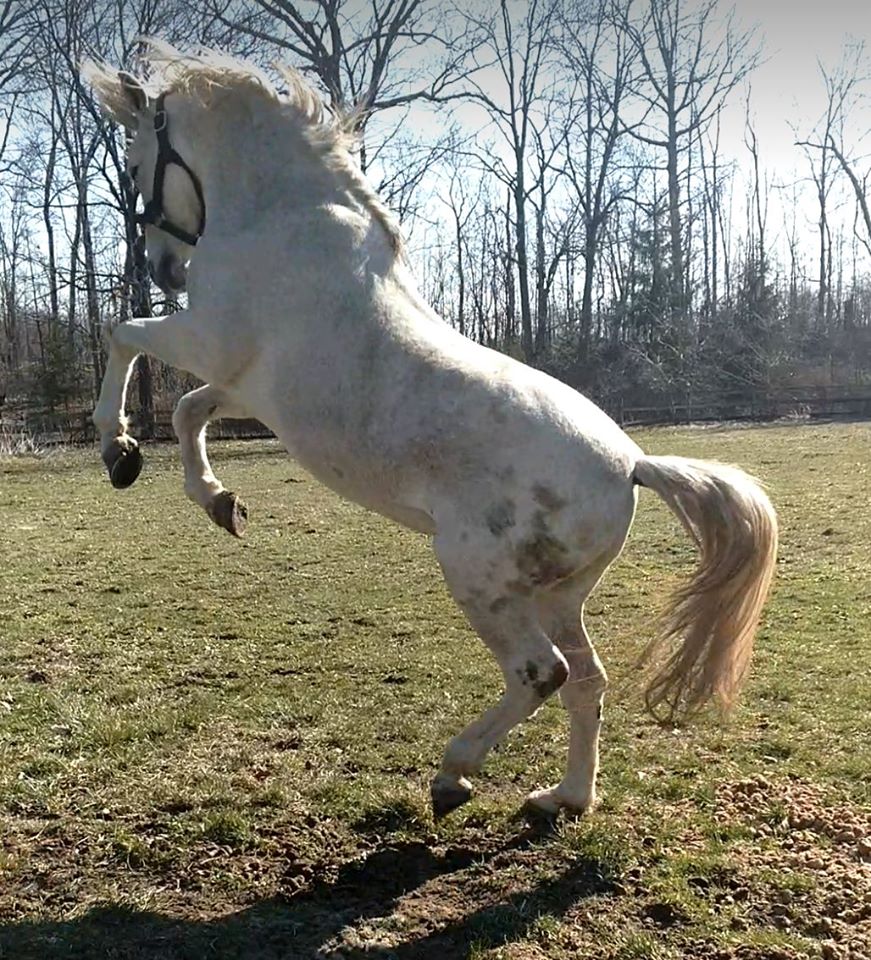 Thursday March 16, 2017. Picture to the far right above is Asire showing off his Hi Ho Silver stance. Note he is balancing all of his weight on what used to be his most compromised rear leg.

March 17,23, and 24, 2017. Rode him for 5-10 minutes at a walk to determine the areas in the right hind specifically the stifle and hock, area that needed the most attention to further the healing. Quickly found and made some adjustments causing a shift in his pelvis. Better overall balance in the rear end.

April 28, 2017 Rico was the star of our Healer Gathering! Two Healers that attended the gathering were able to walk around on Rico. They later stated it was an incredible experience and that he felt very sound.

May 5, 2017. Rico and I experience our first real taste of freedom off the lunge line! His excitement is building as his physical body regains the strength it needs to dance yet again! What we dream of will become our physical reality.

May 7, 2017. Rico told me that it was imperative that we ride immediately. I told him it was imperative that he be perfectly behaved. I haven’t really ridden Rico that much and never alone. God always has an amazing sense of humor as we were far from alone. Check out the photo below on the left! All kinds of spiritual beings present!

May 10, 2017. Egg bar hind shoes removed today. Regular shoes now all the way around. Picture to the far right below. 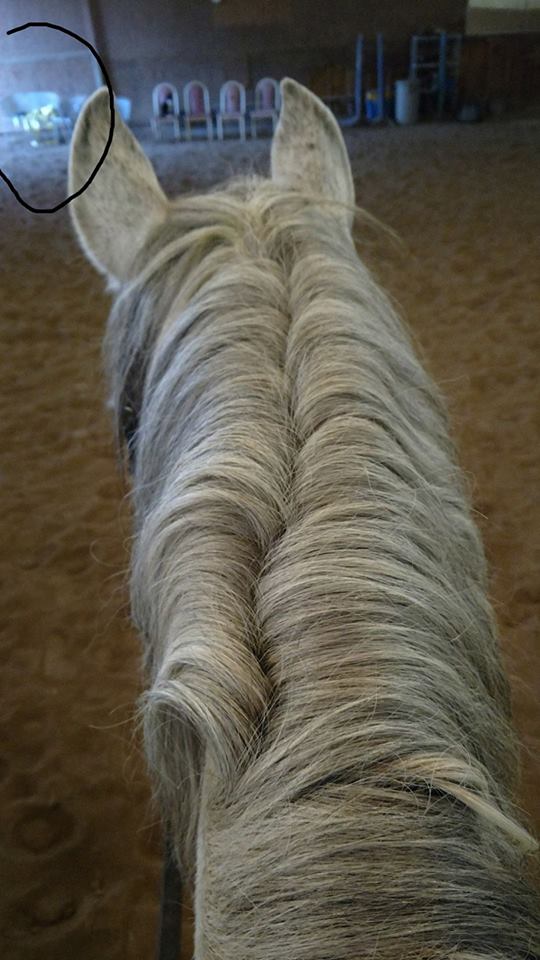 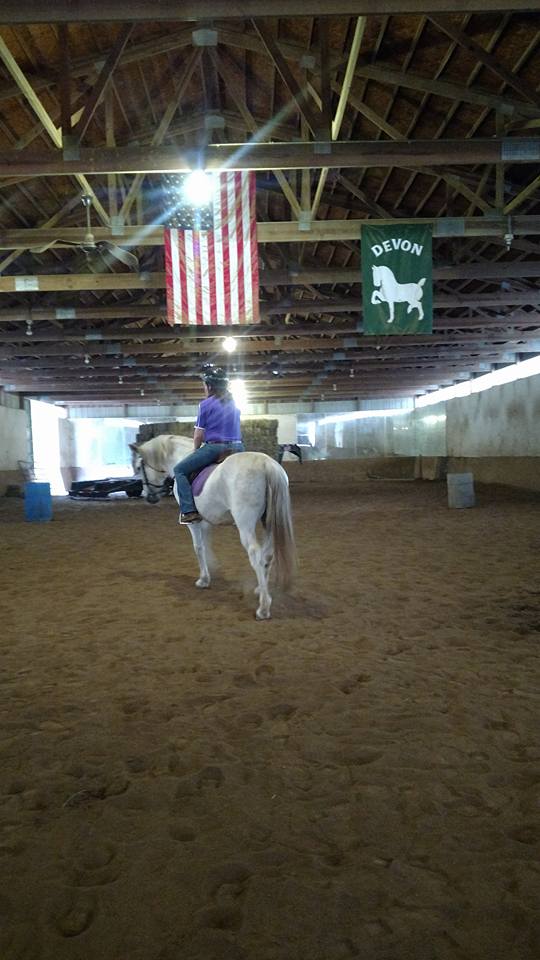 This type of healing is available to you and your 4-leggeds as well. Specials going on NOW including all distance healing! Please like WOW Natural Healing on Facebook and Instagram to continue following Asire’s healing journey! Please contact us at Info@WOWNaturalHealing.com to start your healing journey today!